While a student at John Muir High School, Alice Brown was one of the most dynamic sprinters in the state...or to ever put on a pair of track shoes in Pasadena, CA.

During her senior year, Ms. Brown was the runner-up in the 100 yard dash at the state finals - finishing just ahead of future  Olympians, Pam

Marshall and Valerie Brisco. She finished 4th in the 220 yard dash behind Marshall, but ahead of another future Olympian, Florence Griffith.

After high school, Alice went to California State University - Northridge, where she solidified herself as one of the fastest female sprinters in the country. Her hopes of running in the 1980 Moscow Olympics were derailed when the United States boycotted the games.  Four years later, she would earn a spot on the 1984 U.S. Olympic Team competing in the 100 meters, and as the 1st leg runner in the 4 x 100 relay team. She would earn a silver medal in the 100m, and a gold medal in the 4x100 relay.

At the 1988 Olympics, Ms. Brown would earn another gold medal on another 4 x 100 relay team that included Florence G. Joyner and Evelyn Ashford.  She won her first gold medal with Evelyn Ashford at the 1980 Olympics.  However, in 1987, Ms. Brown was part of the World Championship 4 x 100 relay team (which included Florence G. Joyner and Pam Marshall) that not only won gold, but set a U.S. record of 41.58. That awesome race in Rome, Italy is recorded as one of the fastest times in history.

Ms. Brown is truly a Pasadena legend.  Ms. Brown is a member of PASHOF's 2015-16 Hall of Fame Inductees. 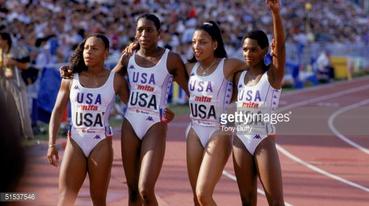 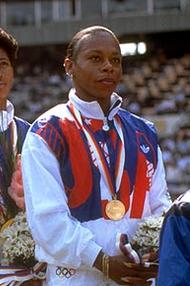