When Dorothy Poynton-Hill won the silver medal in the 1928 Olympic springboard, she had barely passed her 13th birthday and set the record of being the youngest U.S. Olympic medalist in history. The August 12, 1932 headline from The Telegraph read "Pretty Pasadena Girl Wins Dive" after she earned a gold medal in platform diving at the 1932 Olympic Games on a total point score of 40.26. Poynton-Hill dominated the platform event, winning the U.S. National AAU titles between 1933-35. In 1936, when many denied her abilities to compete in the 1936 Olympics, the pretty Pasadena girl responded by winning the gold in platform diving and the bronze in springboard diving.

Mrs. Poynton-Hill was elected to the International Swimming and Diving Hall of Fame in 1968. 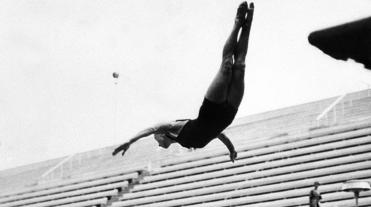 The city-owned Brookside Plunge (aka the Rose Bowl Aquatics Center) was built in 1923 and closed in 1984 because of disrepair. In 1985, the City of Pasadena Board of Directors endorsed a partnership between the public and private sectors seeking to renovate the pool complex. Hence, the birth of the Rose Bowl Aquatics Center - a project that would refurbish the Brookside Park buildings and grounds and build two additional   pools,  one  of  which would meet international competition 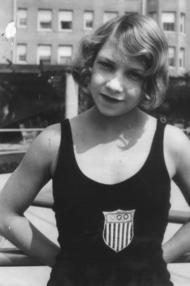