After turning pro, Vines would have as impressive a career as any tennis player in history, being that it was so short. ​Between 1934-1940, Vines won Wimbledon, the U.S. Open(x2), U.S. Pro, Wembly Pro, French Pro, Australian Open Doubles, U.S. Open Doubles and the U.S. Open Mixed Doubles. From 1934 and 1935, Ellsworth was the pro king.

Tall and thin, Vines possessed a game with no noticeable weaknesses, except (according to Jack Kramer) because of his great natural athletic ability, laziness. He was particularly known for his powerful forehand and his fast serve, both of which he generally hit absolutely flat with no spin.

In 1939, Vines lost his world #1 ranking and retired from tennis to focus on his interest in the game of golf.

​Vines competed on the Professional Golf Tour for 15 years, and while he wasn't as talented a golfer as he was a tennis player, he was still strong. He finished as high as 12th on the money list in 1947, and was in contention to win many tournaments. Real Clear Sports has Vines ranked #3 on the top 10 list of athletes turned golfers.​ 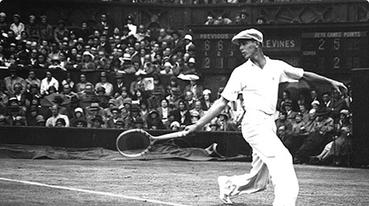 Ellsworth Vines, "The Stud" attended Pasadena High School in the 1920s. In 1927, Vines led Pasadena's team that was known to beat their opposition 17-0 in match play.

Vines also played basketball where he was just as outstanding.  After high school, Ellsworth attended the University of Southern California where he lettered in basketball and golf. 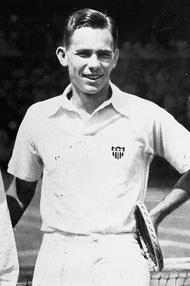