Armed with his talent,  a ball and a bat, Mr. Robinson used them in the sport of baseball to challenge the many unfair aspects of American life; a burden not many could have endured without resorting to violence.

Mr. Robinson was chosen, not so much because he was the best negro baseball player at the time; many gave that title to Josh Gibson. What Jackie had that Josh didn't was the fact that he had been raised in a diverse city - Pasadena, California.  Here he was able to participate and compete against the best white athletes in Southern California.  Mr. Robinson was an all around athlete having participated in football, basketball, baseball and track & field and tennis while at John Muir and UCLA.

​The story, now printed and distributed all around the world, is that Mr. Robinson played a few years in the Negro League before Branche Ritchie signed him to the Brooklyn Dodgers in 1946; Jackie was assigned to the minor leagues in Montreal. In 1947, six days before the start of the season, Jackie was called up to the Brooklyn Dodgers where he played for 9 seasons.  The rest is history.

Mr. Robinson is a major part of American history and the pride of Pasadena.

MLB Rookie of the Year 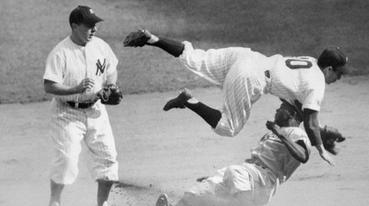 Arguably,  Jackie Robinson is the most well known person in the history of Pasadena. His talent in sports literally changed America.  We're fortunate that he was chosen to travel into the then  unknown.  Being the first African-American in Major League Baseball was a heavy burden during segregation. 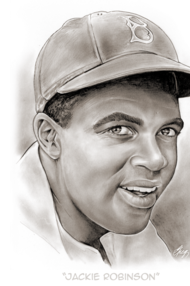